The DiSTI Corporation, a leading provider of graphical user interface development software and solutions, is pleased to announce that the United States Patent and Trademark Office (USPTO) has granted a patent (No. 11,003,425) for an invention titled “Mixed-Criticality User Interface Development System.” 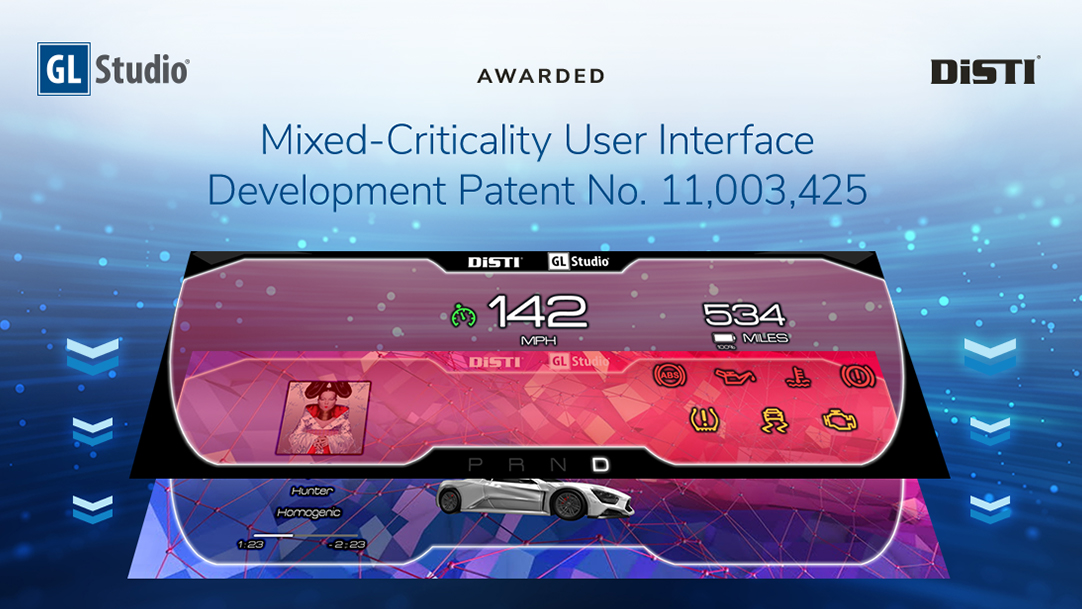 The patent differentiates DiSTI’s HMI Software products and solutions and the GL Studio software to facilitate both Safe and Non-Safe User Interface content in the same design file with a unified development workflow process.

“DiSTI has always been on the bleeding edge of the latest User Interface development technology,” said Christopher Giordano, VP UX/UI Technology for DISTI. “We were the first to certify our runtime for functional safety for the automotive market, and now have used that technology to formulate a best-in-class unified workflow to accommodate Safety-Critical and QM content in the same design. We are thrilled with the award of another patent that even further differentiates our GL Studio HMI/UI solution, and we look forward to taking this unique capability to market to better serve our customers.”

This process uses GL Studio’s OneTouch Deployment™ to handle the generation, content transfer, and application launch that takes less than 60 seconds to iterate. This feature allows for a very rapid iteration cycle. It lets UI design teams visualize their content on the hardware target without the need for complex programming and gives a common platform for implementation engineers to work seamlessly with UI designers.

This patent is the latest award reflecting on The DiSTI Corporation’s investment in research and development. The patent acquired by DiSTI further strengthens its leadership in developing cutting-edge, industry-specific applications, instrumental in driving digital transformation across organizations worldwide.

Inquire about our professional solutions today.

Start your developer journey with our solutions now.

We will use your information to respond to your inquiry. We may also contact you about our products and services. You may opt-out at any time using the unsubscribe link in messages you receive from us. You can learn more about how we handle your personal data and your rights by reviewing our privacy policy.